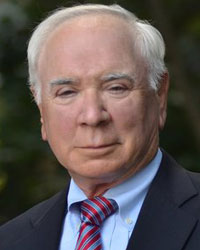 L. James D’Agostino has over 35 years of experience in government contract law. He focuses his practice on procurement awards and contract disputes at the federal and state level. He has extensively prosecuted and defended complex bid protests before multiple federal agencies, the Government Accountability Office (GAO), the U.S. Court of Federal Claims, and the U.S. Court of Appeals for the Federal Circuit.  Mr. D’Agostino has also represented clients in claims and appeals before the Civilian Board of Contract Appeals and the Armed Services Board of Contract Appeals.

Mr. D’Agostino’s practice areas include review and interpretation of Government contracts, including cost reimbursement, time and materials and firm fixed price contracts; cost issues and the applicability of the regulations involving cost allowability; audits and other matters before the Defense Contract Audit Agency (“DCAA”); complex claims regarding changes in scope, termination for default and delays; negotiation of aviation contracts (both commercial and Government); False Claims Act issues; suspension and debarment actions; and teaming and joint venture agreements.

Mr. D’Agostino has also represented clients in weapons systems contracts, including all facets of carrier-based landing and launching systems, F/A-15 Simulator, Mark 48 ADCAP Torpedo, and numerous other major systems.  He represented an international client in the negotiation of a contract for the Boeing 787 class aircraft.  He has also been involved in numerous issues regarding classified contracts.

Prior to joining Fontana Law Group, Mr. D’Agostino was a partner at several major law firms to include Reed Smith and Greenberg Traurig.

Mr. D’Agostino has been noted in Chambers and Partners, USA as one of the leading government contract lawyers in the world in 2008.

He served over 10 years as the Vice-Chairman and then Chairman of the Conflicts of Interest and Ethics Committee of the American Bar Association’s Public Contract Section.

Mr. D’Agostino has been involved in numerous speaking engagements and moderated several panels for organizations such as National Contract Management Association, the Association for Corporate Growth, the Federal Procurement Institute and the International Factoring Association.

He has served on the Board of Easter Seals Serving DC, Maryland and Virginia, as well asthe Board of Trustees of the Fairfax County Public Schools Education Foundation.