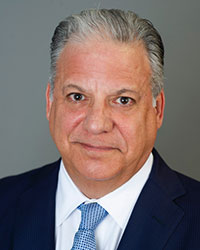 James C. Fontana has over 35 years of experience as an attorney specializing in government contracts, commercial transactions and related litigation, as well as ethics compliance and corporate governance issues.  In 2006, the Association of Corporate Counsel named Mr. Fontana Outstanding Chief Legal Officer in the Washington D.C. Metropolitan Area.  In both 2005 and 2006, the Washington Business Journal named Mr. Fontana a Top Attorney in the Washington, DC area in the General Counsel category.  In 2014 Mr. Fontana received the Power Players Award from Washington SmartCEO in recognition of his “leadership, accomplishments, innovation and success” as a Washington, DC-area attorney.

Mr. Fontana is formerly Senior Vice President, General Counsel and Corporate Secretary of Apptis Holdings, Inc., a leading provider of IT solutions and services for government and industry.  In this position he was responsible for all of the legal affairs of Apptis and its subsidiaries.  Prior to joining Apptis, Mr. Fontana served as general counsel to a number of other public and private companies, including Alion Science and Technology Corp., Wang Government Services, and BDM International (through its Vinnell Corp. subsidiary).  He also has substantial private practice experience with well-known law firms, such as Reed Smith and Kominers Fort.

Mr. Fontana is a frequent seminar speaker and author on issues relating to government contracts, ethics compliance, and technology-related issues.  He had previously been a regular contributor to Washington Technology’s Infotech and the Law column and is currently a frequent contributor to the WT Opinion column. Mr. Fontana has published articles in numerous other publications, including the American Bar Association’s Public Contract Law Journal, the National Contract Management Journal, BNA Bloomberg, the National Defense Industrial Association and Federal Publications.

Mr. Fontana has testified before Congress to include the U.S. House of Representatives Small Business Committee on issues related to the federal government procurement process.

Mr. Fontana is a former adjunct professor of law at George Mason University School of Law in Arlington, Virginia, and was an adjunct professor in the University’s MBA Program.  He is currently a member of the Dean’s Advisory Council for the George Mason School of Business and a member of the Board of Advisors to the GMU Center for Government Contracting.  He is also a member of the Advisory Board for the Innovative Solutions Consortium, a coalition of top-level industry executives from the government and commercial sectors.

Mr. Fontana served a three-year term as Chairman of the Board of Easter Seals for the Greater Washington-Baltimore Region, a charitable organization long known for its service to children and adults with disabilities, and previously served as Easter Seals’ Treasurer.  In 2007, Mr. Fontana was presented with the Clarence F. Donohoe Award for outstanding contributions to Easter Seals.  He continues to be an emeritus member of the Easter Seals Board.

Mr. Fontana is a member of the American Bar Association (Public Contract Law Section).  In addition, he is a former board member of the Professional Services Council, the principal national trade association representing the federal government’s professional and technical services industry.

Mr. Fontana is a graduate of Temple University School of Law, where he was a member of the Temple Law Review and Moot Court Board, and the recipient of the International Trial Lawyer Association Award.  He received his undergraduate degree from American University, where he majored in economics.